Beginning June 4, Ronald Reagan Washington National Airport (DCA) will update signage throughout its terminals, roadways and parking areas to make it easier for passengers to navigate the newly expanded facilities and more closely align with terminology used at other major airports. Upon installation, the new sign package will simplify passenger travel from curb to gate.

The timeline of changes includes:

During the weekend change-over, gate numbers will remain the same, with the addition of each gate’s concourse before the number. For example, Gate 23, located in the newly named Concourse C, will become Gate C23. The new concourse that opened in 2021 will be named Concourse E, including Gates E46-E59. Signs throughout the airport will reflect the change, and airlines will begin using the alphanumeric gate designations on boarding passes and flight information screens on Sunday, June 5. While no gates are relocating and no airlines are moving, passengers are advised to check their boarding passes and in-airport monitors to confirm their gate assignments.

The following week, June 6-10, DCA will update signage outside the terminal buildings and along airport roadways and Metro station entrances to reflect new terminal names. The current Terminal A will become Terminal 1. It will contain Concourse A, serving Southwest, Air Canada and Frontier airlines. The current Concourse B/C will be renamed Terminal 2 and will contain Concourse B, serving Delta, United and Alaska airlines; Concourse C serving American and JetBlue airlines; and Concourses D and E, serving American flights.

Signs for the parking garages associated with each terminal also will be updated to Parking 1 and Parking 2, coinciding with the new terminal names. The airport’s Economy Parking Lot will keep the same designation.

“We believe these sign enhancements will assist travelers moving through the terminals,” said Vice President and Reagan National Airport Manager Paul Malandrino. “With new facilities constructed as part of Project Journey, updating the signs airport-wide became the next logical step to help passengers navigate the airport. Our team has worked hard to prepare for the conversion of over 1,000 signs.”

The re-naming follows completion of Project Journey, a $1 billion capital project that built two new security screening areas, opening more of the newly named Terminal 2 to “post-security,” and added a new concourse to accommodate American Airlines’ regional flights, which formerly required a bus ride from the gate to remotely parked airplanes. This construction eliminated three smaller security checkpoints that were located at the entrances to concourses. Space vacated by the former checkpoints is being converted to space for new concessions, restrooms and seating areas.

While road signs are being updated, some older terminology may temporarily be visible. Drivers are advised to use airline names for guidance until the transition is complete. 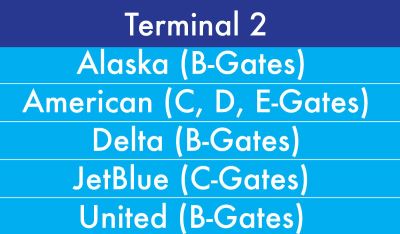 For more information, including maps of the terminals, visit flyreagan.com.